Our relationship with Kachieng Secondary School in Kenya began in 2009 when Pauline Prince, the School Link Coordinator at humanitarian charity Amani UK visited us. Becky High students began to write letters to Kachieng students telling them about life in the UK and Prefects organised fundraising activities so Kachieng could purchase science equipment. We also donated writing equipment which was taken to Kenya by Amani UK volunteers.

Support continued and in 2015 we were able to fund the building of a security station at the school gates and the repair of the school latrines. We also sent school uniforms for orphans, sports wear for the netball and football teams, sports shoes, stationery for teachers and pupils, sports equipment (balls, cones and nets) and sanitary towels.

More recently, our  autumn mufti day raised almost £3000 which is funding a new school kitchen at Kachieng. The fire damaged outhouse that was used offered no facilities such as running water or drains, proper boiler or cooking area. Work is almost complete and we're told the staff and students can wait to start using it.  Take a look at this film and the photos at the bottom of the page for a timeline of the works.

We, the family of Kachieng Secondary School, wish to express our heartfelt appreciation to you, Beaconsfield High School for the assistance given to us towards the completion of a kitchen whose foundations you laid at Kachieng Secondary School. Beyond just the completion we have been able to install vital equipment and water systems that make the kitchen very modern, hygienic and easy to use. We thank you so much for this great support. We have received a total of KSH 396,000 which is no mean effort by you our partners. Our girls have continued to enjoy the use of sanitary towels courtesy of your support through you Upendo Foundations and for this to we remain forever grateful. Our teachers students and parents are very happy about your donation and have sent regards. - Ondiek Andrew Achola, Principal

To put into perspective just how different the life of Kachieng and Becky High students is, can you imagine life without electricity, not for a few hours but months?  The area suffers persistent electricity problems, but most recently, the three transformers serving Kachieng, Sikri technical college, the other schools in the area plus the shopping centre blew up so they haven't had electricity for the last few months! Kachieng finds it difficult to pump water from the borehole so they have hired a generator to do it which is very expensive. 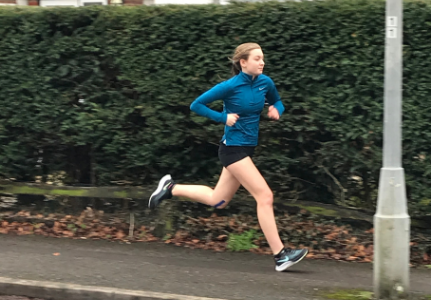 To counteract the increased amount of time we are spending on screens and to raise awareness of our links with the school, we are currently Racing to Kachieng! Students and staff are walking, cycling, running or doing a home workout to cover the kms between Beaconsfield and Kachieng. Distances are recorded and submitted via Strava or Runkeeper and the House to collectively reach 6500km will be crowned the winners.

At the time of writing (February 2021) we have collectively covered over 22,000 km and Bhutto are in the lead having covered 4,036 km. Year 8 have clocked up the greatest collective distance, as have staff with over 5,000 km between them.  Watch this space to see which House will be crowned winners!